I grew up around automated sheet metal and coil processing equipment design and manufacturing. I first helped my father on a design project at around 16 years old; by programming a PLC to control a simple robot designed for use on a machine that produces downspout elbows.

The robot took the elbows out of the machine, crimped the end, and drop the crimped elbow into a box positioned next to the machine to reduce operator repetitive motion strain.

This is a video of the newer version of that machine and robot which improved on my original design:

I started working for Iowa Precision back in 1987 as a drafter after my father's adjustable elbow machine company was acquired by them. I helped usher in the use of CAD shortly after that and later wrote the software to replace their mainframe based business management software.

Sometime around 2007 I was asked if I could take over the control software development for a new machine which I was able to name: The DieMation

This was the project that launched my career in automated control software:

I was then asked to get involved with the controls on their flagship productline and have been writing the control software for new shipments of that product line since 2008.

Here are some sample videos of projects related to that product line: 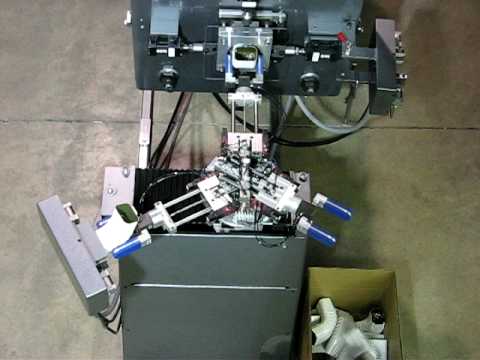